What I learned from winning a book deal with Hay House 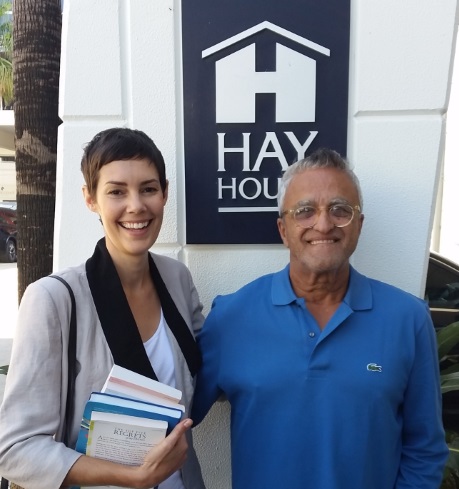 In order to achieve anything in life, any dream that you have, I believe you have to do two things:

Yep. All that stuff about shouting your dreams from the rooftop and manifesting them by trying to force them into existence…I just don’t buy that. It’s always felt like too much pressure to me. If I declare to the world that I’m going to achieve this or do that then I suddenly feel like I have to do these things because if I don’t, then I’m letting YOU down. I’m going back on my word. I realise that’s the whole point of it but the rebel buried deep inside me goes, “but what if I change my mind? Maybe I don’t want that anymore! Stuff you guys, I don’t have to do anything!”

A beautiful friend of mine, Kaye Vlachos, put it in a very special way. She said, “Your dreams are very precious. Keep them safe. Only share them with people you absolutely trust will be as gentle and caring about your dream as you are.” Kaye has represented Australia for soccer and is an athlete empowerment coach. She sometimes comes into my courses for teen girls and shares her wisdom. When she shared that little nugget of wisdom with my students I was at the back of the room nodding and furiously writing it down.

And let it go? Why would I suggest letting go of a dream if it’s so important to you? Well I learnt a few years ago that we don’t have as much control as we like to think we do in this life. I’ve learnt to trust that everything works out exactly how it’s meant to. Good or bad, we aren’t dealt anything we can’t get through and it’s all here to teach us whatever it is we’re meant to learn. So I prefer to dream my dreams. Write them down. And then let go of any attachment to them. This requires a level of trust and faith that what you’re dreaming of will come to fruition…if it’s meant to.

So how does all of this relate to getting a book deal? Well I recently won the Hay House Writer’s Workshop Competition, following in the footsteps of my dear friend, the late Jess Ainscough and other incredible Australian self-help authors Megan Dalla-Camina and Cassie Mendoza-Jones.  Winning this competition has given me an opportunity to publish a book that will help teen girls to truly shine from within, including the content and teachings from my Shine From Within courses.

I couldn’t believe I won and still can’t to tell you the truth! When someone asked me recently if I had been working away and dreaming of it for years, I said, “No, it just sorta happened.” And I felt a little embarrassed by that. Like I hadn’t really earned it because I hadn’t shouted from the rooftops that I wanted to write a book for the last few years and I didn’t spend my whole childhood wishing I could be a writer.

But I did dream it. I just totally forgot! As I cleaned up my office the other day I found a notebook that I had sitting by my bed for a few months last year. I would scribble in it before bed sometimes or if an idea came to me in meditation. And this is what I wrote:

“I want to write this book, with Hay House. It will be filled with Heaven’s grace and love. It will help lots of young women and girls. It will be passed down to siblings and nieces. It will just be out there in the world, doing its thing. I feel like this is supposed to happen. Thank you.”

Going back and finding that the other day was like discovering a little hidden treasure.

So how did this actually come about? I went to the Hay House writer’s workshop in Brisbane last year. Everyone who attended could put in a proposal. The thing was, at the writer’s workshop, the Managing Director of Hay House Australia, Leon Nacson and Reid Tracy, CEO and President of Hay House Inc. spoke about the benefits of self-publishing as well. So for the next few months I kept wondering if I should submit a proposal or just self-publish. Not long before the deadline I realised I was stuck in no-man’s-land by not doing anything at all. So I decided to write the book proposal and submit it and let fate decide if I should self-publish or not.

And the reason it was the winning book proposal? That I couldn’t tell you for sure but these are some of the factors that I believed helped me:

Whether you want to write a book proposal or dream another dream…I hope this helped in some way.

This article was originally written for the Wellspring Blog over at Endeavour College of Natural Health in 2016.